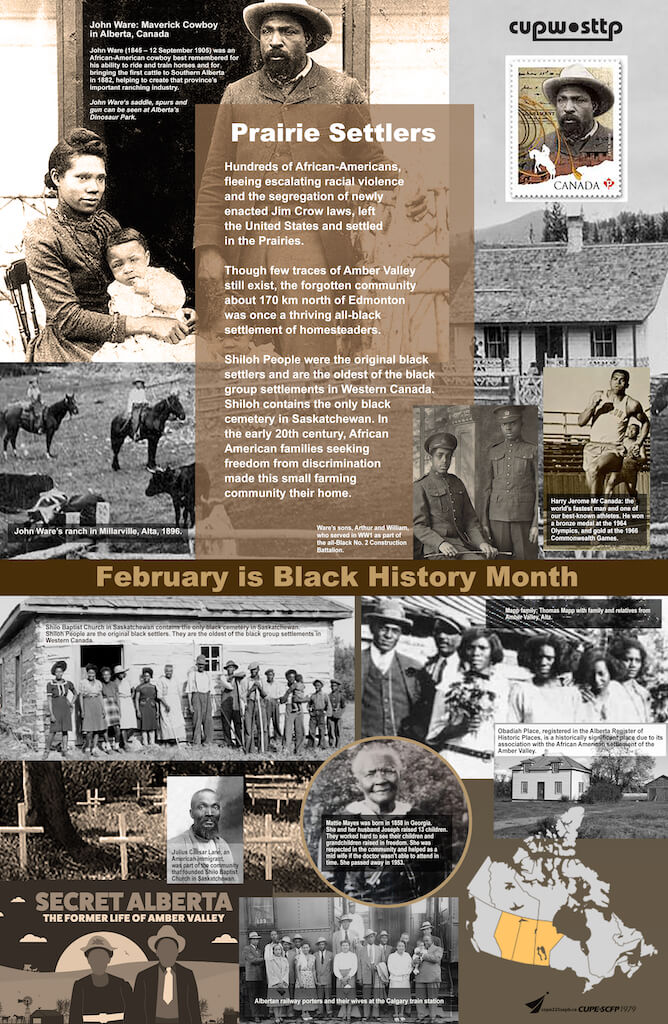 February is Black History Month. Throughout this month we celebrate the heritage, traditions, achievements, and culture of people of African descent and diaspora. It’s been officially recognized by the federal government since 1995. Each year CUPW honours an individual, place or story of African heritage.

These stories and accomplishments are too neglected in our history books and museums. This year’s poster sheds light on the often-erased stories of African Americans who left the United States to settle in the Canadian Prairies.

In the 19th and early 20th centuries, hundreds of African Americans left the United States to find a place where they could settle in peace and build communities away from racist laws and cultural oppression. Some were hoping for better employment opportunities, or simply freedom.

One of the Black settlements created through the persistence of the Oklahoma African-Americans remains to this day. Amber Valley in Alberta was settled by Black farmers who had been denied the same rights as others and who found the laws in Oklahoma to be oppressive. At the same time, the Canadian West was opening up, and settlers were actively being sought from the American Midwest. At its height, there were about 300 residents and they eventually had their own all-Black baseball team representing Amber Valley. More would have migrated had the Canadian government been more supportive in allowing family and former neighbors to join them from Oklahoma.

In Saskatchewan, the Shiloh people were the original Black settlers and are the oldest of the Black group settlements in Western Canada. To this day, Shiloh contains the only Black cemetery in the province.

February is a time to reflect on the relationship between Black history and our engagement with the world around us. We must continue to fight against racial harassment in the workplace and work with our allies to pressure governments to adopt employment equity legislation. It is also time for us to be aware of the history we are writing and what we can do to build a future that we can be proud of.

Find out how your local is celebrating Black History Month and reflect on respect, and inclusivity in the workplace.