Evaluating The Financial Viability of Canada Post Corporation: “Dark Glasses or Rose-Coloured Ones” 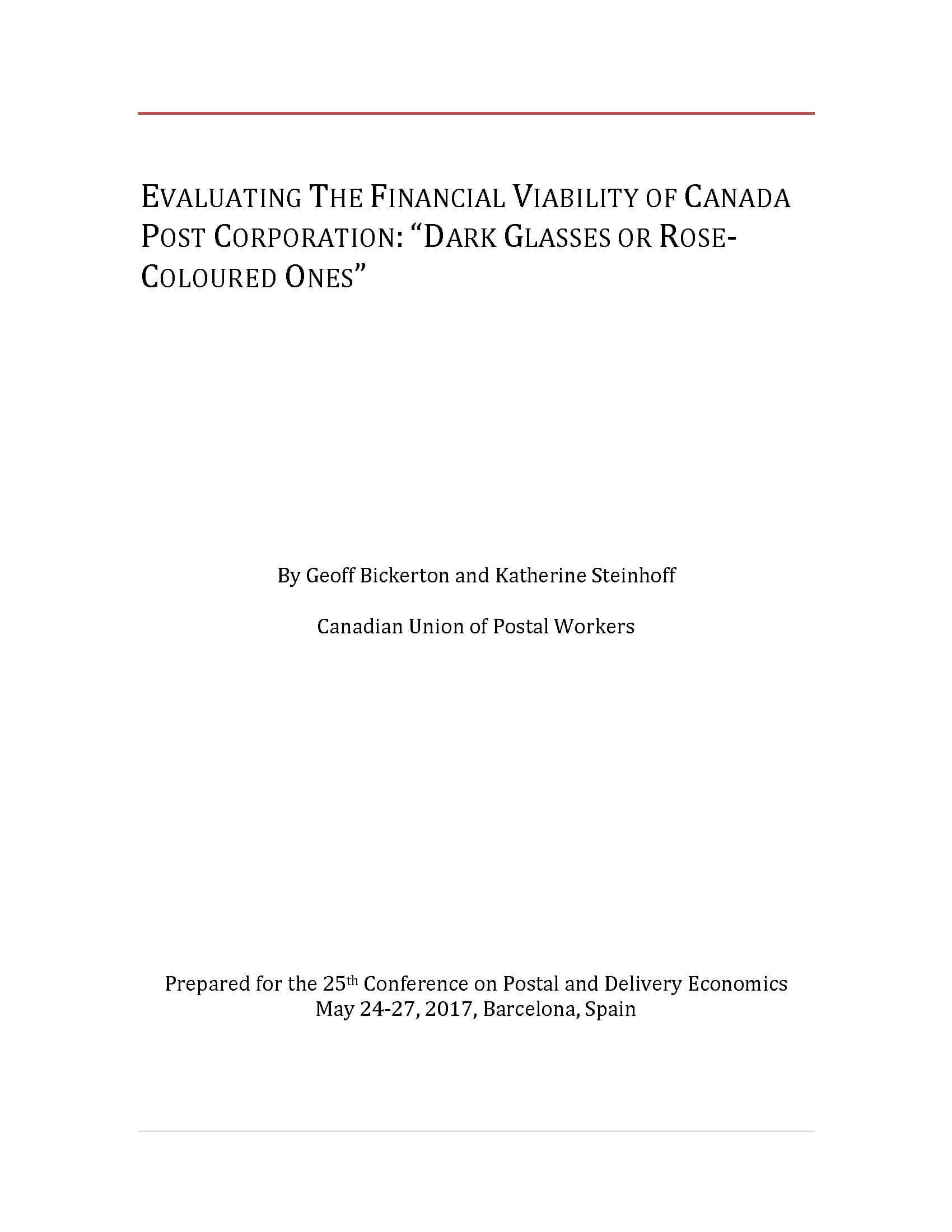 By Geoff Bickerton and Katherine Steinhoff, Canadian Union of Postal Workers
Prepared for the 25th Conference on Postal and Delivery Economics, May 24-27, 2017, Barcelona, Spain

Unions, not surprisingly, don't think that there is a financial crisis within the corporation, citing financial reports from Canada Post itself. However, the Task Force, appointed to examine the financial viability of Canada Post, tell a different story. Their analysis shows a looming financial crisis – ironically, citing the same financial reports as those used by the unions. Since they are both using the same data, obviously someone is either wearing dark glasses or rose-coloured ones.

Tom Lukiwski, Member of Parliament and
Chair of the Standing Committee on Government
Operations and Estimates, “Committee’s study of
Canada Post”, November 7, 2016

During the Canadian government’s recent review of Canada Post Corporation (CPC), a Member of Parliament (MP) observed that it was possible for different stakeholders to look at the same financial information and come to different conclusions about the corporation’s financial viability. He wryly noted that “someone is either wearing dark glasses or rose-coloured ones” (Lukiwski ).

This paper aims to evaluate the financial viability of Canada Post through a clear lens, while recognizing that it is difficult to make predictions because post offices operate in a dynamic environment.

The use of the Internet and digital services is on the rise and mail volumes have fallen as a result of the shift to digital. However, e-commerce is growing and has boosted parcel volumes. In addition, posts around the world are diversifying. Non-mail revenues now account for an increasing share of industry revenues. But mail is still the main source of revenue for many posts (International Post Corporation 10-14). Futhermore, all industries are dealing with historically low interest rates and other challenges as a result of the 2008 financial crisis.

In short, changes and uncertainties abound and must be considered when evaluating Canada Post’s financial viability. Section 1 of this paper outlines the uncertainties facing the corporation from a cost and revenue perspective. It also looks at factors such as productivity increases, work rules and discount rate changes. Section 2 reviews ongoing discussions within Canada about the future and viability of its public postal service. Section 3 considers recent reports or plans that have made wildly inaccurate predictions about the financial situation of Canada Post. And section 4 provides a framework for more accurately predicting the corporation’s viability.

This paper aims at adding to the analysis of recent papers on volume decline, managing change and positioning posts for the future.