Thursday June 14 2018
Postal workers' unions — the Canadian Union of Postal Workers (CUPW) and the Canadian Postmasters and Assistants Association (CPAA) and more than 600 municipalities(1) and other allies are supporting the set-up of postal banking and making financial services available in every post office. This report recaps the case for postal banking, and shows how clear the path is for its implementation in Canada. 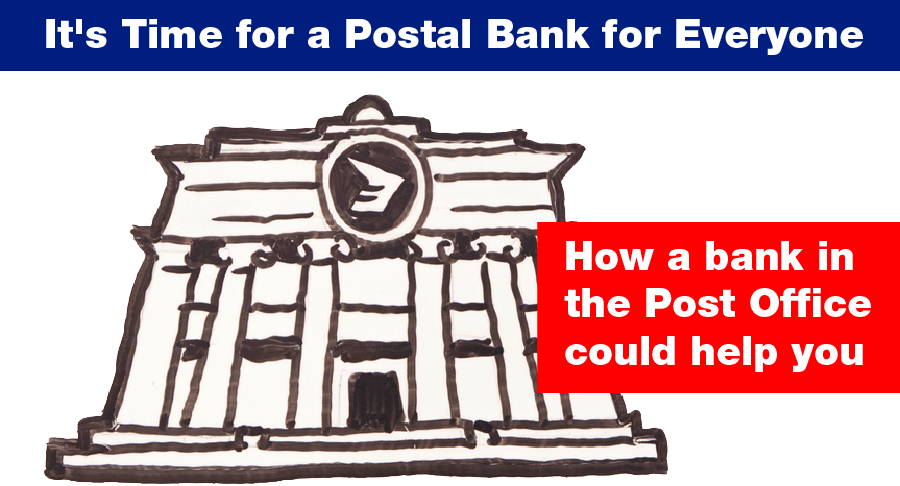 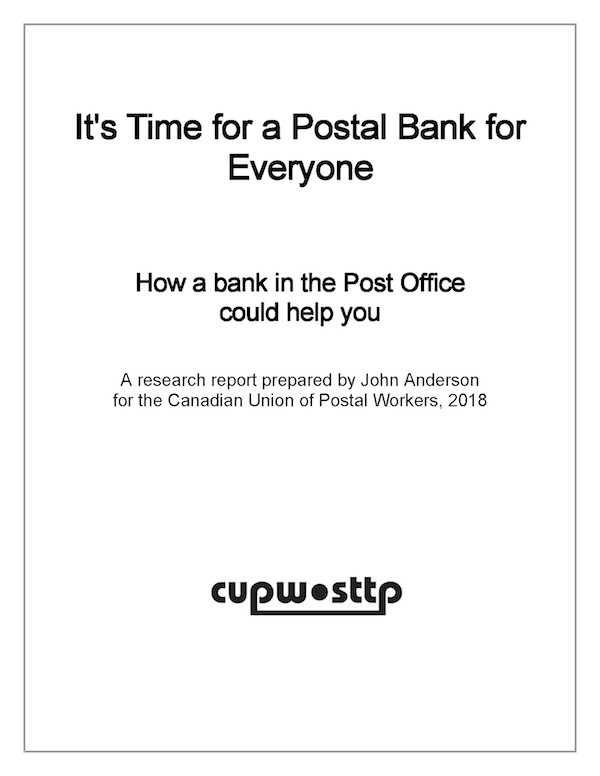 A research report prepared by John Anderson for the Canadian Union of Postal Workers, 2018

How a bank in the Post Office could help you

Postal workers' unions — the Canadian Union of Postal Workers (CUPW) and the Canadian Postmasters and Assistants Association (CPAA) and more than 600 municipalities 1 and other allies are supporting the set-up of postal banking and making financial services available in every post office. This report recaps the case for postal banking, and shows how clear the path is for its implementation in Canada.

Many communities now have no banks or credit unions at all. A study showed in 2014 that 45 percent of small towns and rural communities with a post office did not have any bank or credit union. British Columbia and Nova Scotia had rates above 60 percent, and Newfoundland above 80 percent!

But, it is not only in small town and rural Canada that this is happening. Many neighbourhoods in large and medium-sized cities now have no bank or credit union branch or now have fewer branches. In Ottawa, central downtown Bank Street (as the name implies, once home to major branches of all the major banks), now has more payday loan locations than bank branches. 3

The big six Canadian banks are among the most profitable banks in the world.  They collectively earned $42 billion in profit in 2017, a 13 percent increase over 2016 and double the profits that the banks made in 2010. 4 Their total profits are more than twice the total of all annual deficits for 2016 of our federal, provincial and municipal governments combined, which according to Statcan was $18 billion! 5

The average monthly fee levied on chequing account plans rose by 13.6 percent from 2005 to February 2013. 6 Fees for chequing accounts with unlimited transactions range around $16-30 per month at the major banks. 7 This means many people are paying $360 a year for basic banking services! Cheaper plans are available but charge extra for many services or for using basic services multiple times.

Figures are from the September 2017 websites of the major banks and credit unions.

But does anybody still use branches? Don't we do it all online? One argument used against starting a postal bank is that nobody uses a bank branch anymore. But the reality is that people still need bank branches. A study from the Canadian Credit Union Association showed that over 50 percent of Canadians still use a bank or credit union branch on a regular basis.

Sources: All figures are from the 2016 annual reports of the Post Office Groups and Postal Banks

B. How would it work?

Postal banking can be run in many different ways. The simplest one would be as a subsidiary of Canada Post. It could be set up in one major region of the country at a time. The easiest way to set it up would be as a Crown Corporation in the same manner as the other federally-owned banks. (see below)

C. What services would be offered?

First, basic banking services such as savings and chequing accounts and bill payment. It could then build to other services such as mortgages, business and personal loans, foreign exchange, investments, insurance and alternatives to payday loans.

D. What do the Post Office and the federal government know about banking?

Some ask, "What do Canada Post and the Federal Government know about banking and financial services?" But the answer may surprise you:

The federal government already administers four very successful banks, all of which made profits totaling $3.2 billion in 2016. These banks could provide support for the new postal bank as they already have 242 offices across the country, provide loans to farm families and businesses as well as offer savings products such as Treasury Bills, and until recently, Canada Savings Bonds. Staff expertise from over 7000 public servants could be seconded to the new postal bank.

E. Who would pay for it?

While a new postal bank would require initial investments from the federal government, Canada Post already has the bricks and mortar offices as well as the staff – who would need training on new financial products, but already deals with financial products and retail sales. The profitability of postal banks worldwide shows that any new investments in equipment and training would be quickly repaid.

F. How would it benefit me?

If you use the new services, you would have access to services for all your banking needs in your neighbourhood or community – where many have either had no bank or credit union, or perhaps only one other banking service to choose from. Postal delivery workers could also be equipped with a tablet to help with some of your banking needs if you were unable to leave your home or could not use online services.

G. Who would use the services?

H. Postal banking could become the anchor of many other additional community hub services offered in the post office location.

Because of the number of people who want to use banking services, and because of the revenues that can be made even while offering better and less expensive financial services, the postal bank can become the anchor for these other roles, cementing the long-term place of the post office within the community.

I. How you can help get postal banking in Canada

First, you can start talking about it with your friends, relatives and co-workers. You can find more resources on postal banking at http://www.cupw.ca/en/campaign/resources/postal-banking

Second, you can contact your MP and tell him or her that we need postal banking. http://www.cupw.ca/en/campaign/postal-banking/resources/send-your-mp-message-support-postal-banking

Third, if your town or city is not on this list of ones supporting postal banking, please contact your councilor or mayor and get them to pass a resolution. http://www.cupw.ca/en/campaign/resources/municipalities-and-groups-have-passed-resolutions-or-sent-letters-support

Fourth, if your labour council or your union or your community organization or NGO has not passed a resolution in support of postal banking, get one passed.
Fifth, if you need a speaker on this topic, please let us know and we will try to help you.