We had a fantastic visit at the farmers’ market in Campbell River – big crowds of people, lots of petitions signed and support from the public. Many CUPW members came out to see the Caravan. We played some music with a busker – she played her “Hit the Road, Stephen Harper” song for us. Check out the “Save Door to Door” sign on the boat behind us! Thanks to the NDP candidates and other supporters who showed up to express solidarity with our campaign. 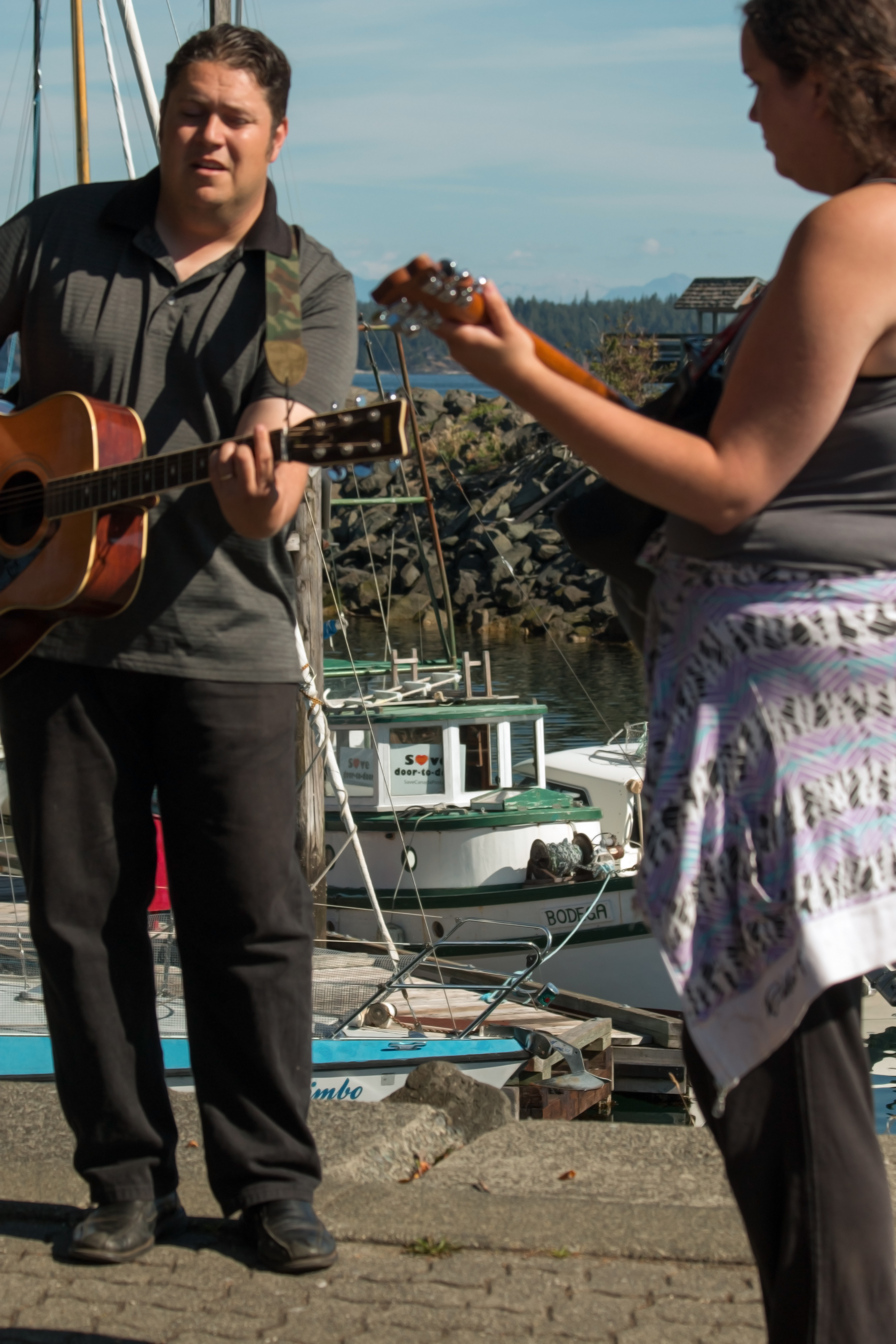 The following morning, we visited the Campbell River postal depot to talk to the members about the campaign. Campbell River is slated to lose its home delivery  on September 21st and Local President, Monica Judd, estimates that the workforce will be cut in half. We talked about how important it was to get out the vote for this election and then members headed out to get a photo with the Caravan. 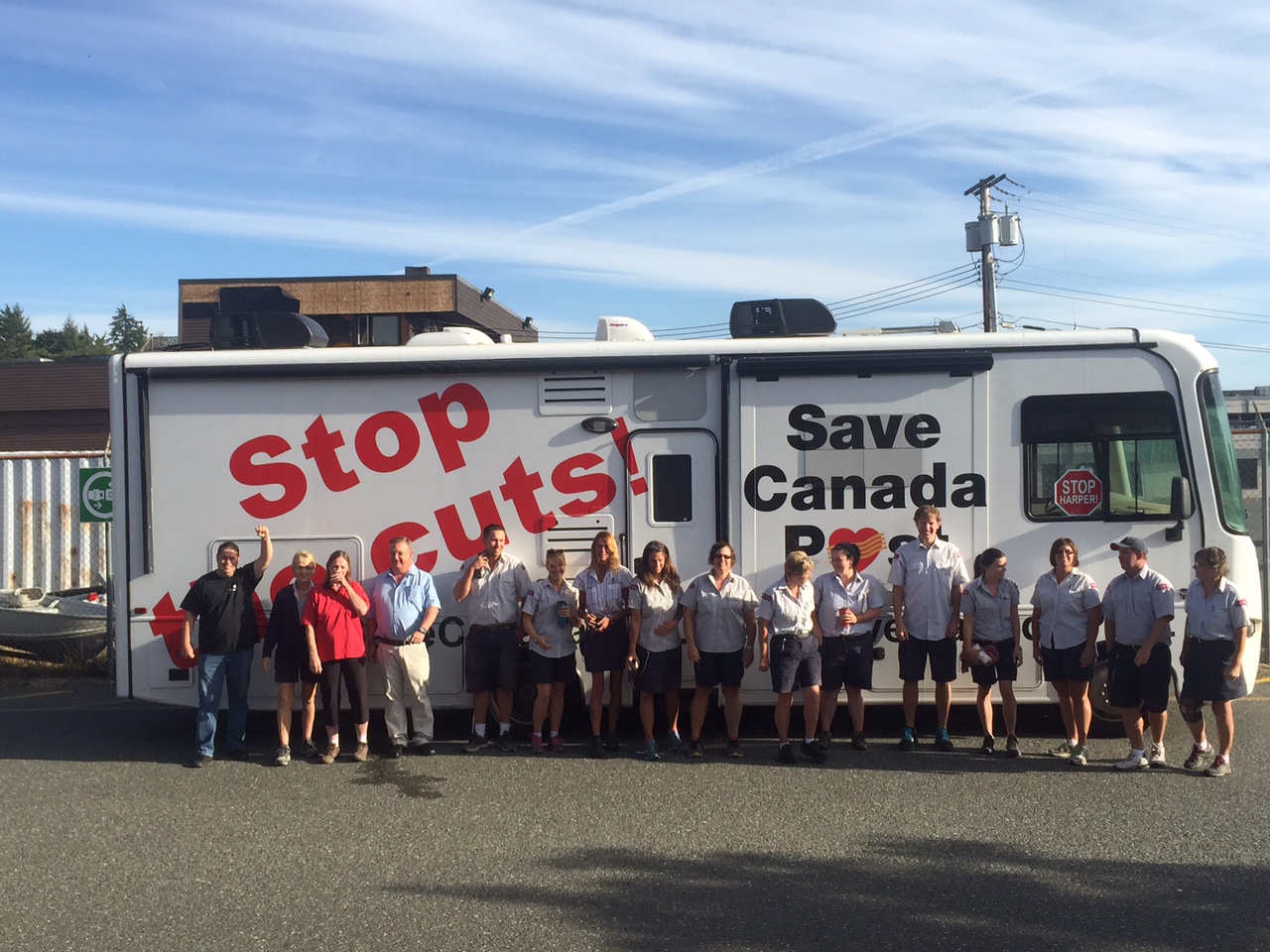 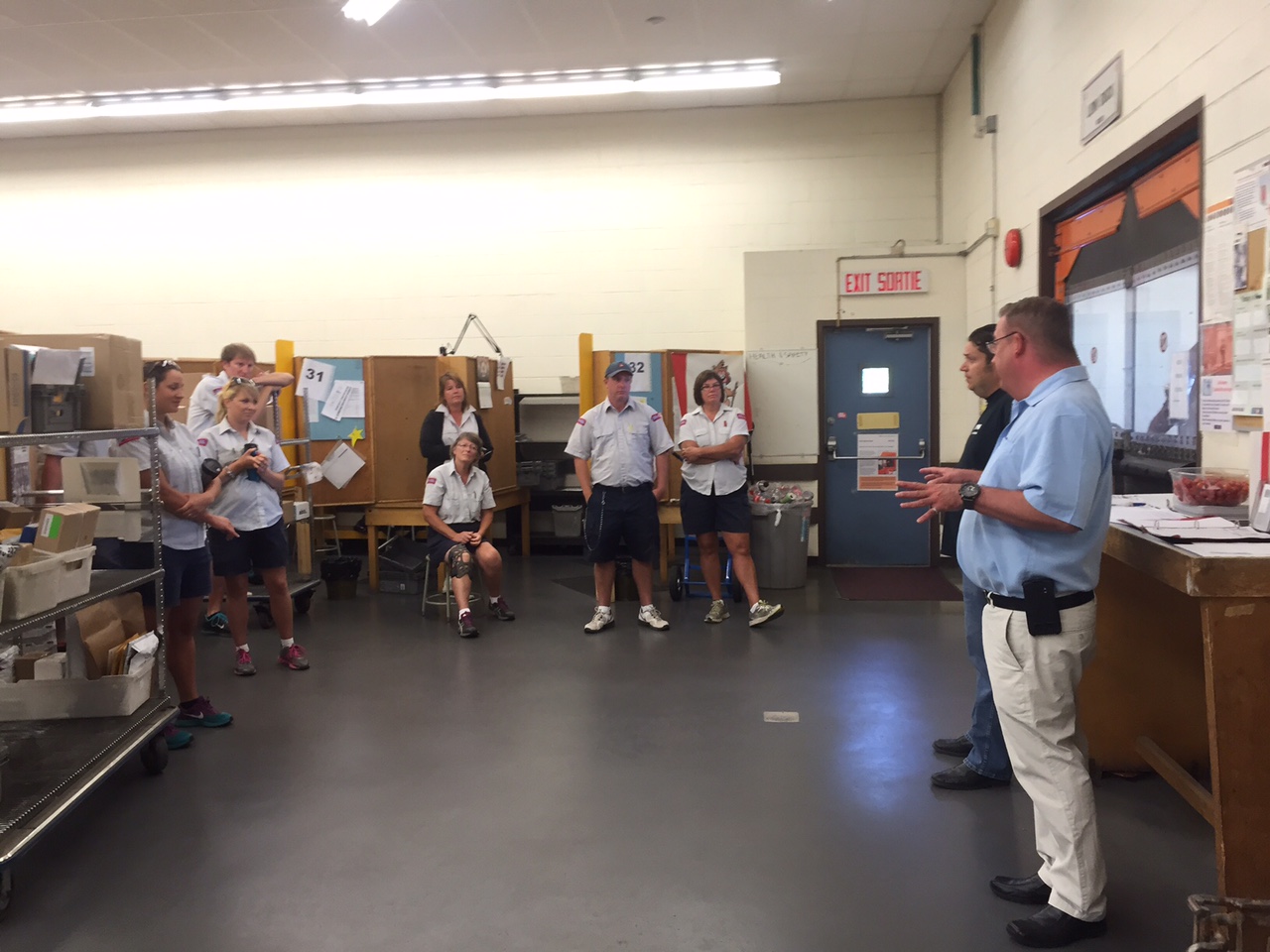 Following the workfloor visit, we headed to Courtenay, stopping en route at the grave of Ginger Goodwin, a legendary BC union organizer, who was blacklisted and eventually assassinated. Every year, people from the Lower Mainland and Vancouver Island visit his grave for the Miners’ Memorial. 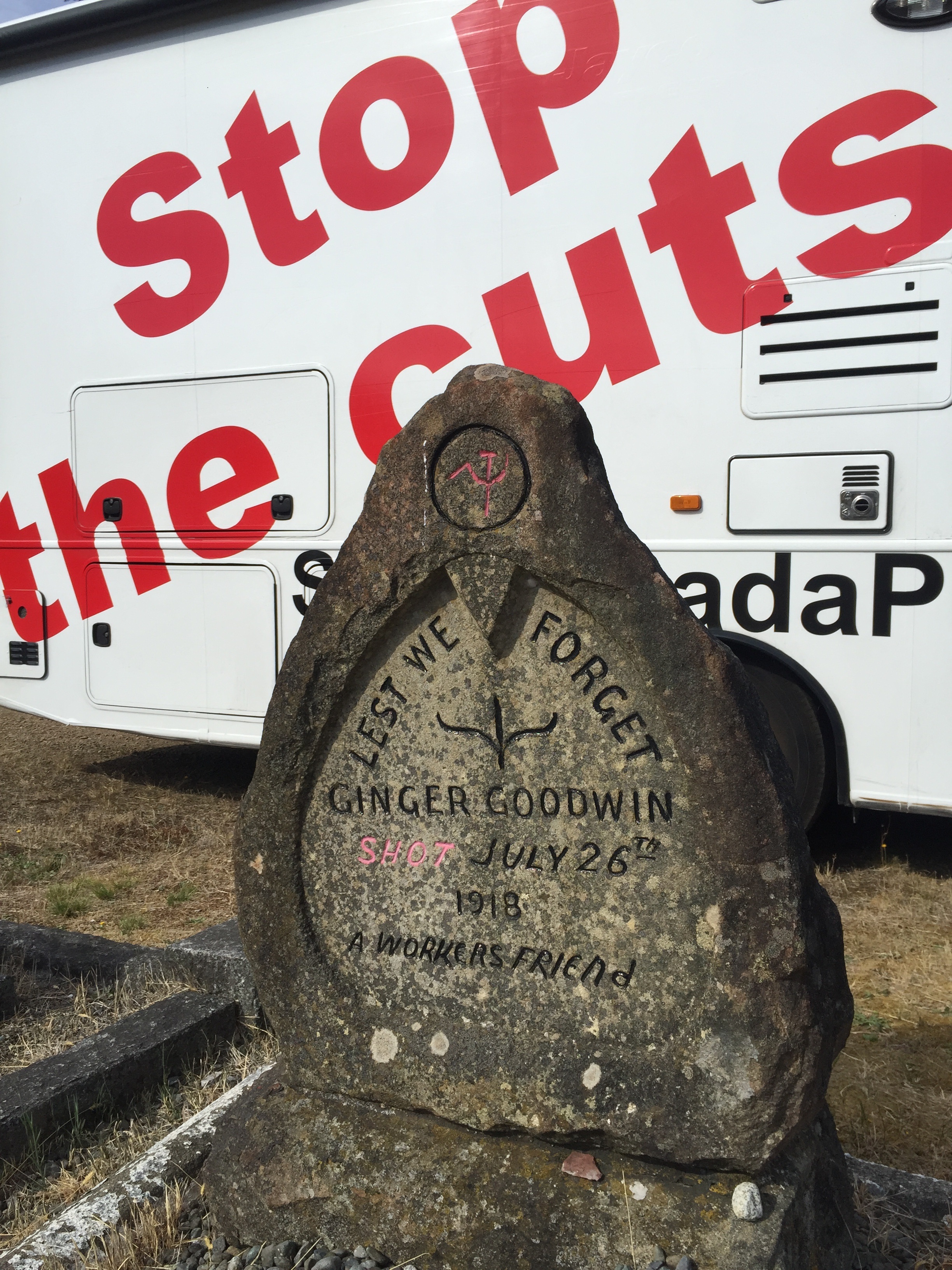 In Courtenay, the Local set up tables and hosted a community BBQ in the Simms Memorial Park. In the space of a few hours, a slow but steady stream of over 150 Courtenay residents came to sign petitions, pick up buttons and signs, and feast on hotdogs, brownies and soft drinks. We had a very enthusiastic group waving signs by the side of the road, attracting lots of honks and thumbs-up from drivers. If we had a prize for “Most Adorable Ally,” it might have to go to “The Duck,” 3-year-old grandson of Local President Darlene Lawson, shown here with his big sister, who enthusiastically yelled “SAVE DOOR!” at passing cars. 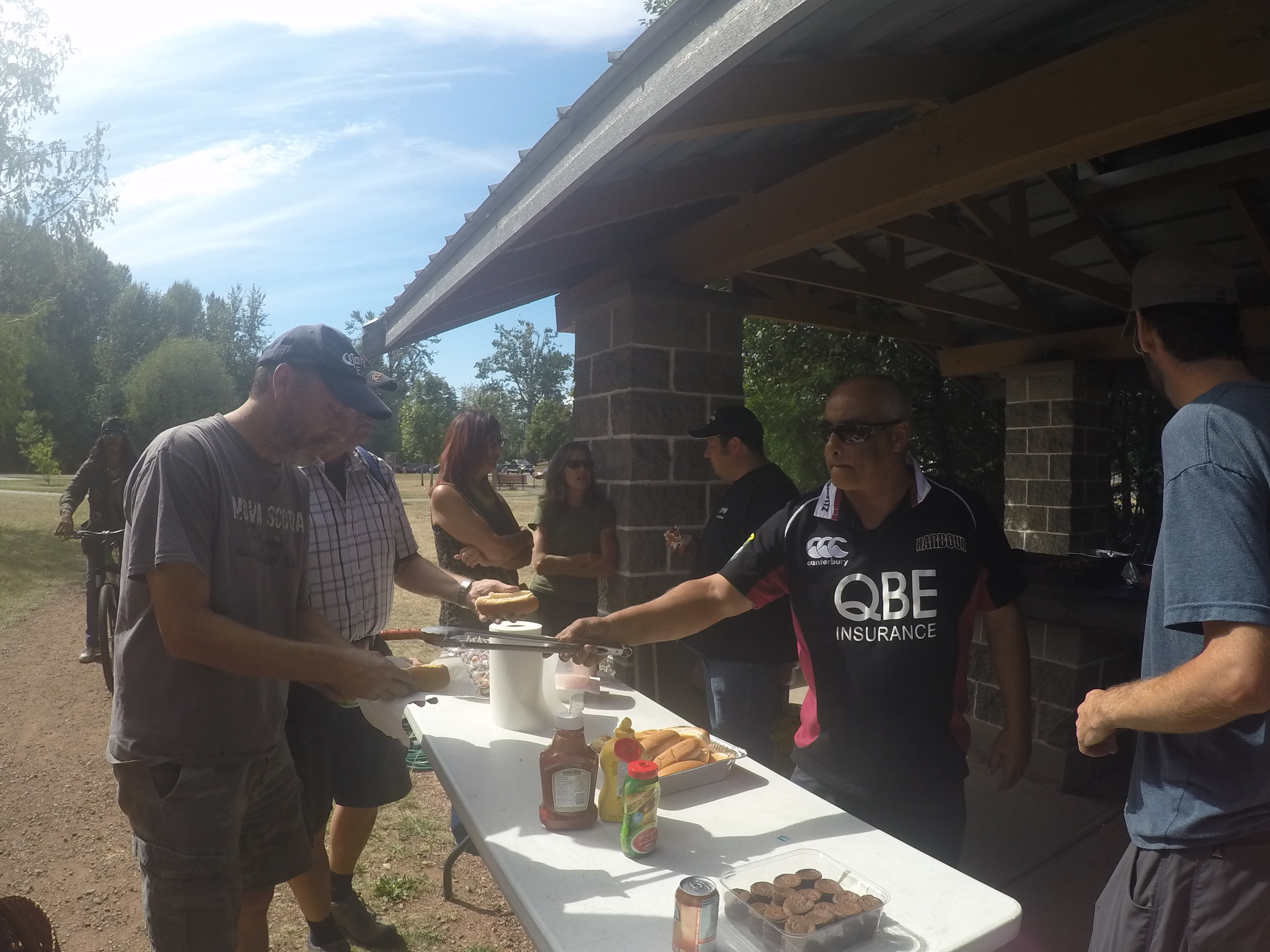 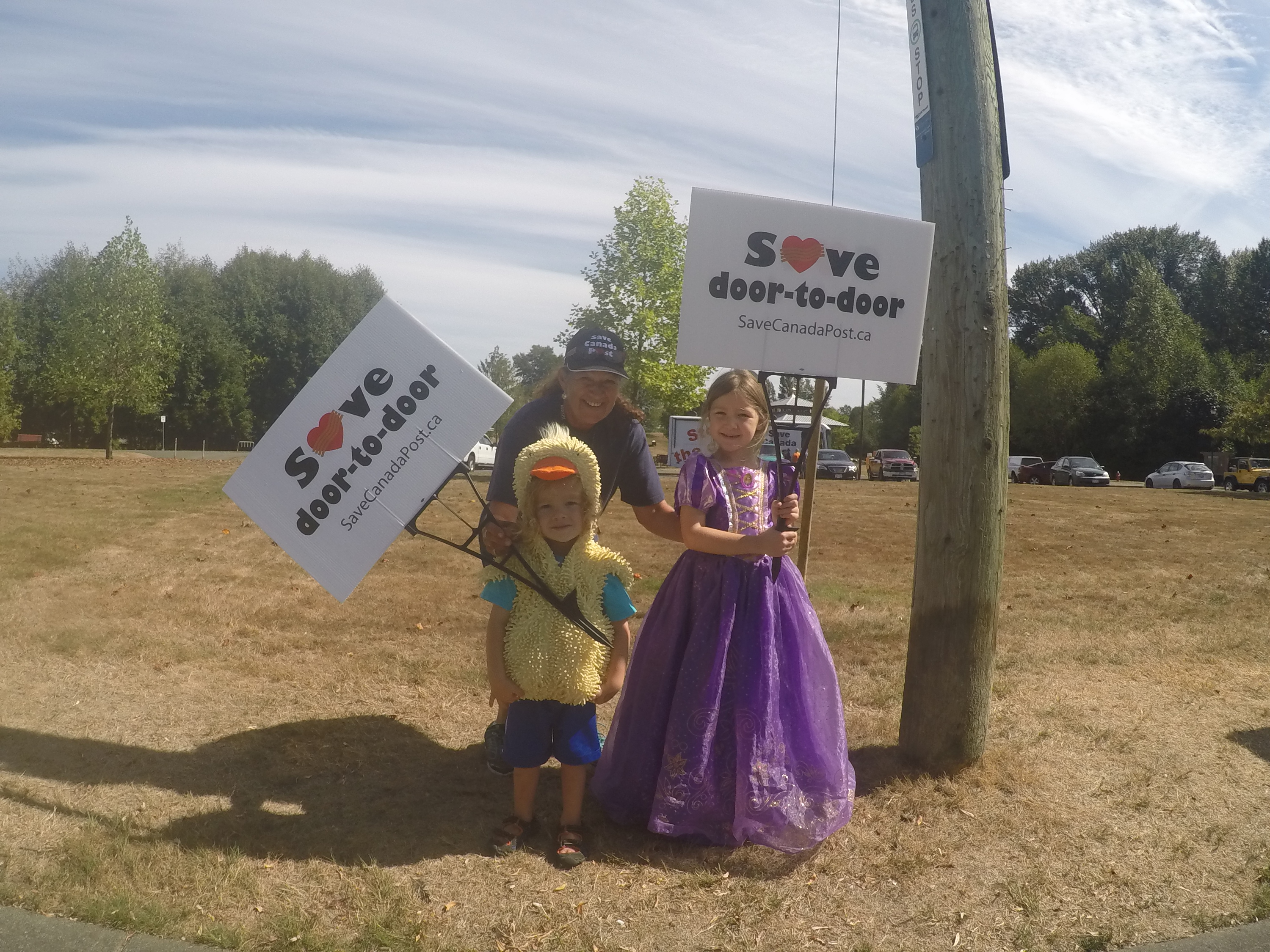 It’s impossible to miss the smoky haze generated by the wildfires in this part of the world and the general dryness – brown grass, dried-up creek beds etc. In Nanaimo, we stopped at the plant to talk to members before they headed off to work. Then we drove to Port Alberni for another community BBQ and petition signing. On the way, we stopped at Cathedral Grove, site of ancient, massive redwood trees, and wondered how such a sublime spot would look with a Harper Box in it. 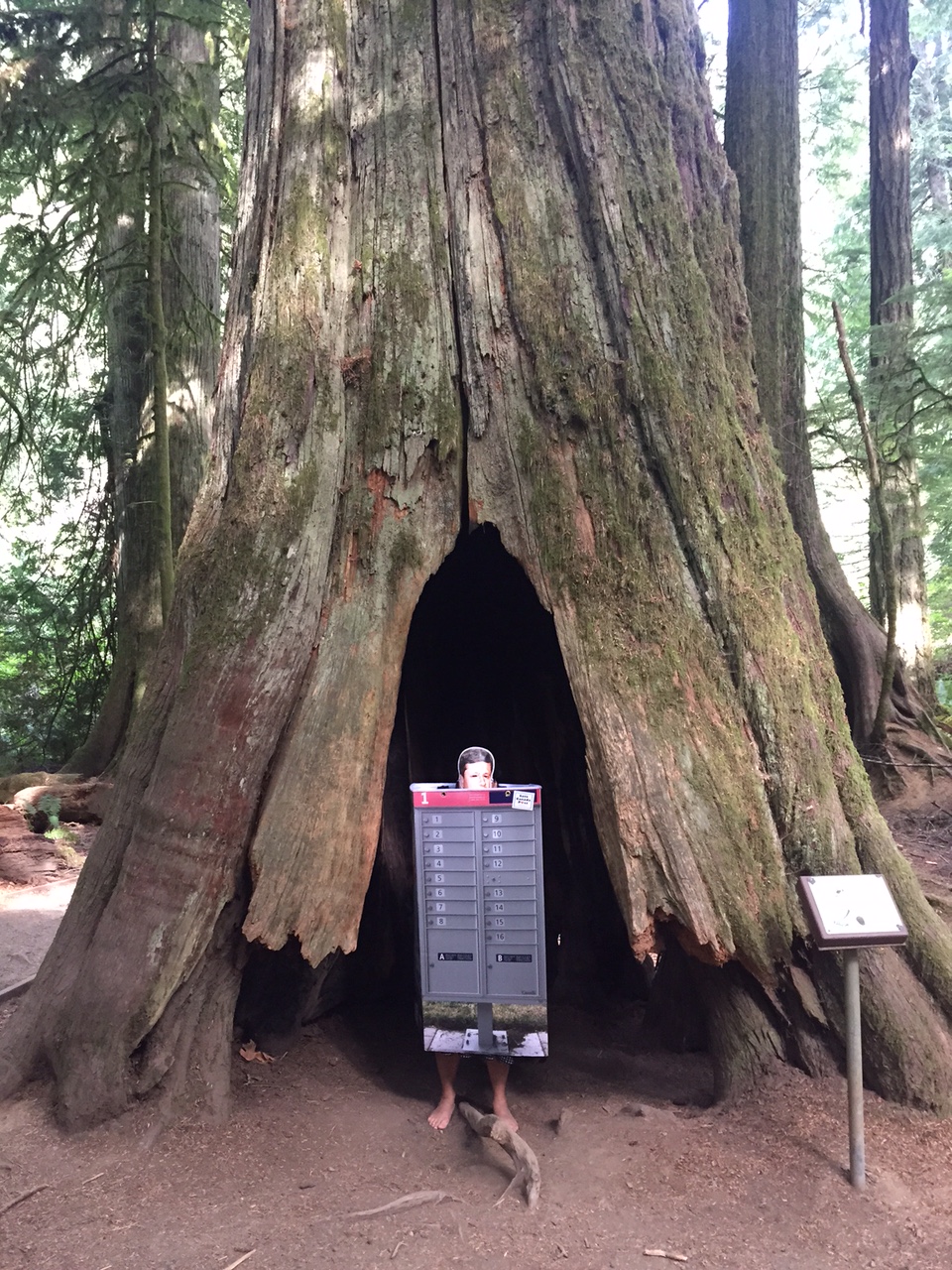 In Port Alberni, many members of the public came out to show their support – we interviewed several of them and will post videos as soon as possible. Retiree Ed Nicholles donned a Stephen Harper mask, getting lots of boos from the crowd. 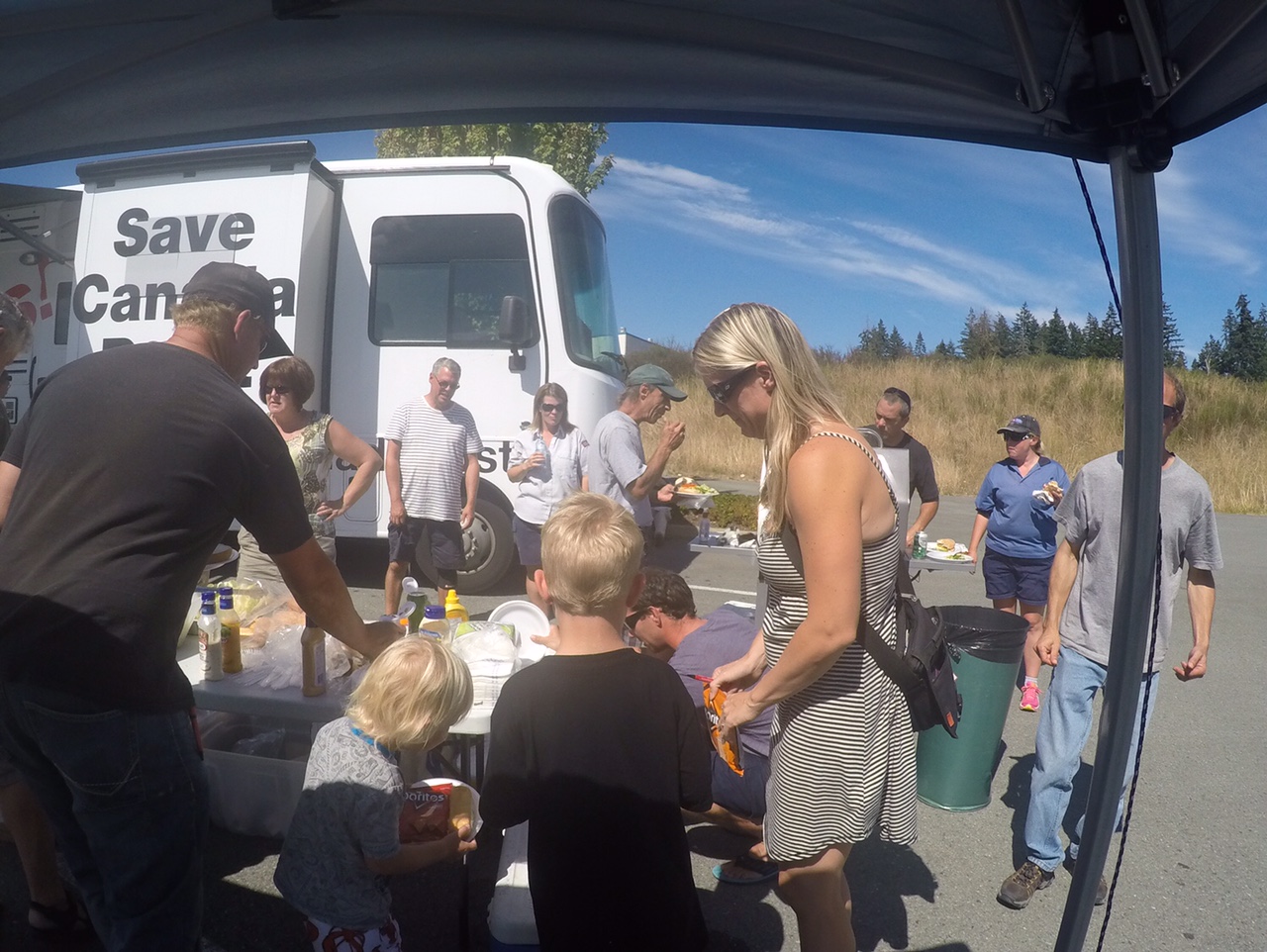 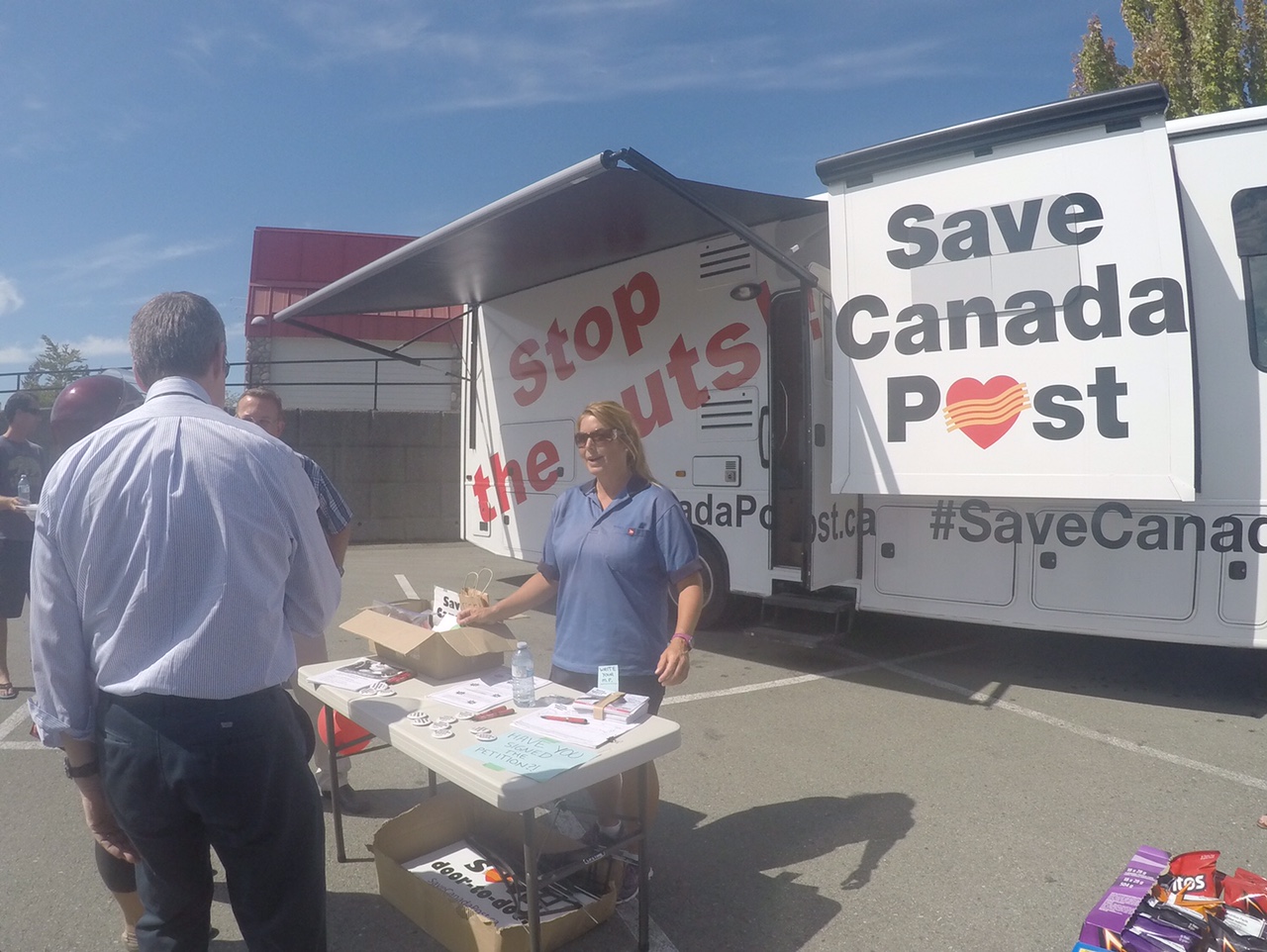 We then headed back to Nanaimo for an afternoon in Maffeo-Sutton Park, where Local 786 welcomed us warmly with a cake and a table full of petitions, buttons and stickers for people to sign. NDP candidates Sheila Malcolmson and Alastair McGregor also came by to repeat the NDP’s promise to restore home delivery and stop the cuts. 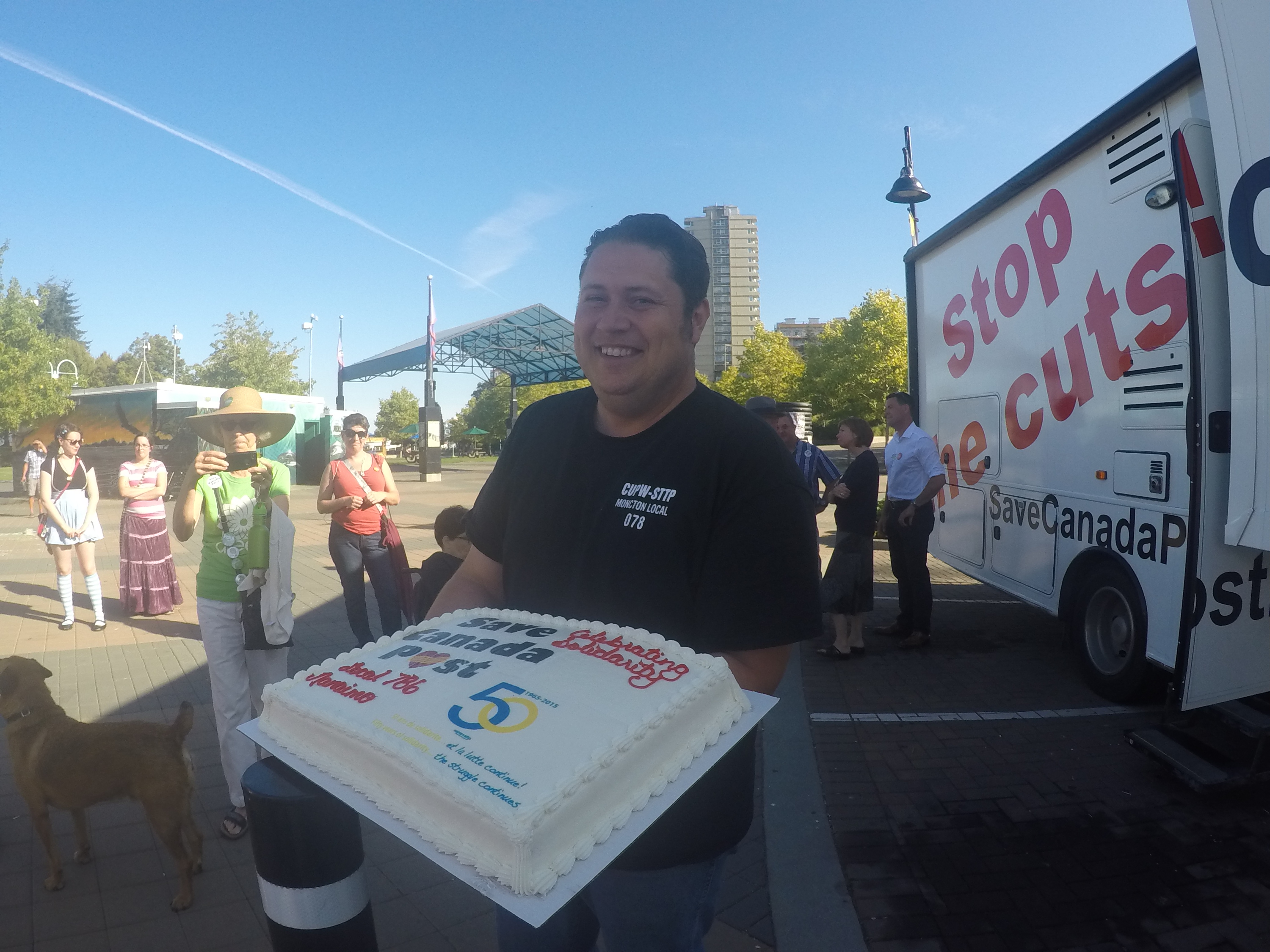 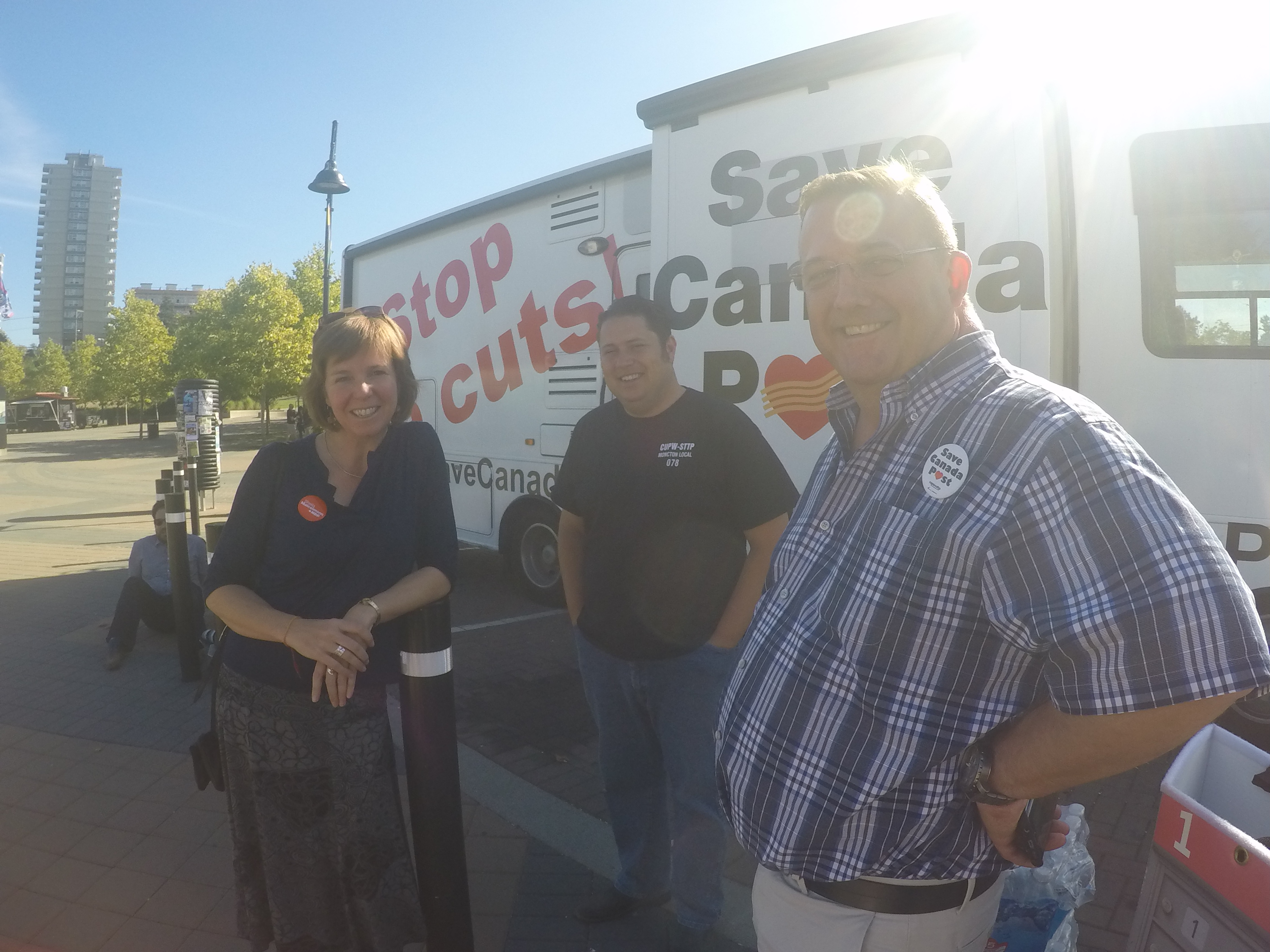 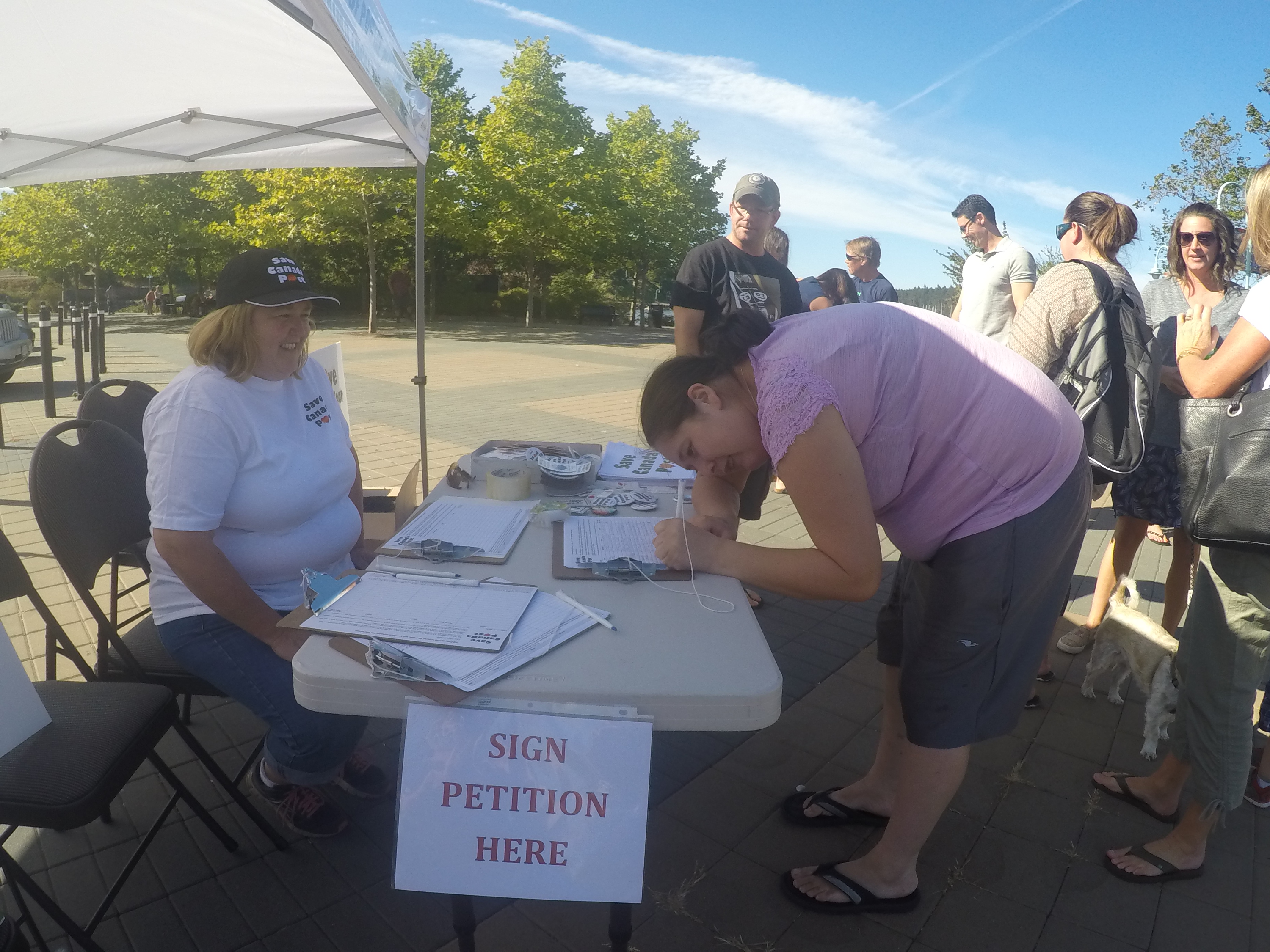 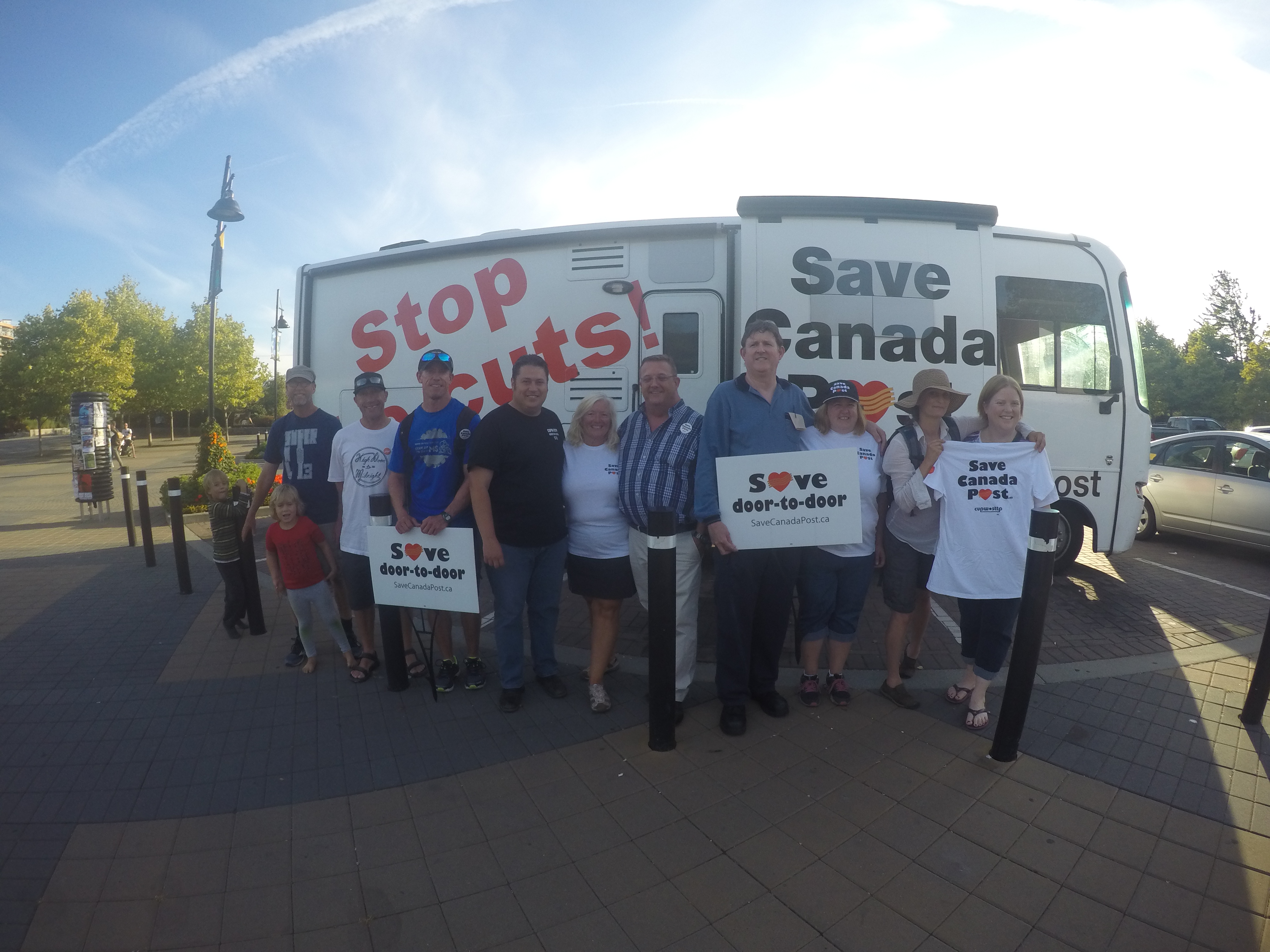 This web site authorized by the Canadian Union of Postal Workers.