The government’s postal service review wrapped up a year ago in time for the holiday break, with a promise that the Liberal government would respond within 90 days. Wait, no, by spring. No actually, within 2017. December came with multiple clear commitments from the Minister’s office, but now we’re told it will be “in 2018.”

Sure, we realize that, in politics and bureaucracy, plans change, people adapt their schedules. But maybe the Liberals don’t get that each delay on the announcement of decisions is frustrating to the millions of us who rely on the postal service - it has real day-to-day impact, especially on hundreds of thousands who are looking at the third winter (for some) with door-to-door delivery cuts:

all for yet another winter.

We’ve been frankly surprised at all the delays. Isn’t this a chance for the Liberals to finally take a bold new direction and distinguish themselves from the Harper government’s austerity moves? Since they took office, they could have repealed C-51, they could have handled cannabis legalization better, they could have taken real action – and not just policy moves – on climate change, they could have put the inquiry into missing and murdered indigenous women and girls on a footing for success, and they could have redirected Canada’s role in the global war machinery. Instead they’ve abandoned or botched a number of campaign promises. We naturally thought the future of Canada Post could be the pre-holiday good news they needed to deliver. We stand corrected: our campaign will continue.

We’re proud of our campaign and we have the will to keep it up.

When the cuts were announced in December 2013 (almost 4 years ago!), CUPW got into action. We soon saw how many people rely on the postal service, regardless on the exaggerated claimsof its decline. And we found many allies who value the service and its potential.

We got to the federal parties while they were in campaign mode, and showed them our public support, our allies, our positive vision for the future. The Liberals, the NDP and the Greens had to respond. And when the Liberals got a majority government, we set to making sure they kept their promises on restoring door-to-door delivery and bringing in a vision of growth, not cuts, in this public service network that connects every business and household in our land. Imagine the potential, after all! 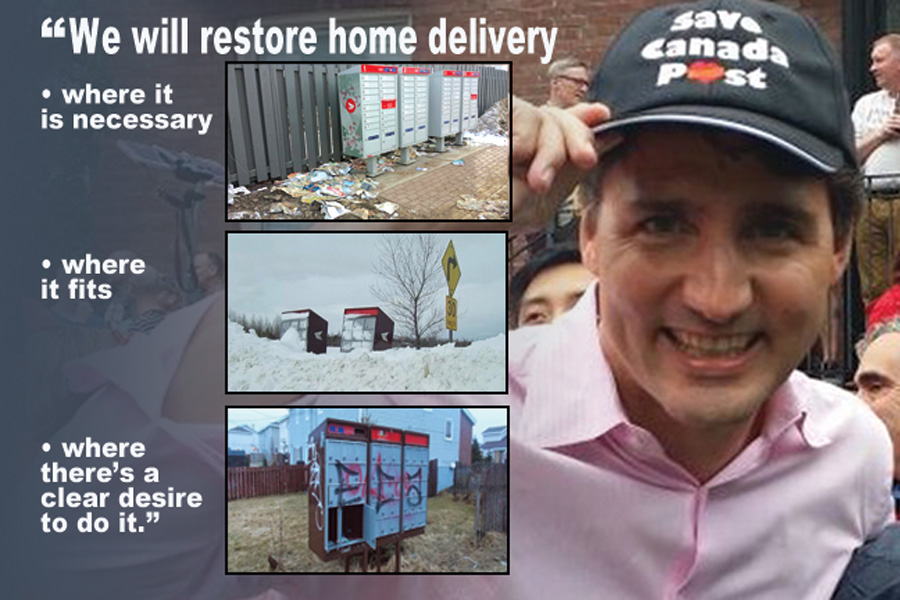 Then the review came in 2016 and we set out to make sure that it would not falter for lack of ideas. The Canadian Union of Postal Workers (CUPW), and other organizations and individuals submitted hundreds of pages of suggestions to the postal service review. Many of these ideas would bring new or increased revenue with them. All of them would leverage the existing system, connecting every community, to do more for residents. Numerous proposals are supported by municipalities and community groups. We just need to bring more of that innovative thinking within the walls of Canada Post Corporation headquarters.

And it’s not all about revenue. Greening the operations of Canada Post, playing a role in bringing broadband to rural communities, postal banking, public-sector cellphone service, helping support seniors to stay in their homes longer, and many more initiatives could ensure the postal service stays as fundamental to the public service infrastructure as ever.

We’re not sitting on our hands

While we’ve been expecting the feds’ announcement, a big turning point has come: parcel revenue growth has started to outpace the drop in lettermail revenue. Which means that what CUPW has been saying for years is more true than ever: Canada Post is not in freefall. But it needs to change to meet the public’s current and future needs – as it is mandated to do. It has time and money to invest in future service expansion and increased relevance — if only the Harper-legacy top management would get out of the way and allow the crown corporation to innovate for the public good.

If you’re looking at your third winter of door-to-door delivery cuts, know that we’re still fighting for you. If you’re a CUPW member, know that we’re taking these issues to the bargaining table with Canada Post while we wait for the government to act. The Liberals need to keep a promise sooner or later and we’re not giving up on this one. Meanwhile, stay warm out there.